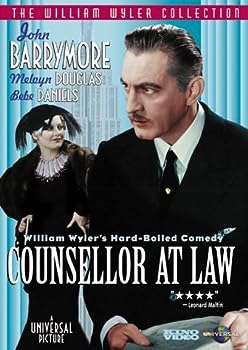 I don’t quite understand what the film Counsellor at Law (1933), derived from a play by Elmer Rice, is about, but it certainly holds the viewer.  This is thanks mostly to director William Wyler and his actors.

John Barrymore carries the film beautifully, with force and despair, and the women here are nigh enthralling.  A successful New York lawyer (Barrymore) becomes imperiled in more ways than one as Wyler’s camera captures the unceasing contacts and interaction in this particular law firm.  Regarding his direction, Wyler said, “No critic ever wrote that [the movie] was just a photographed stage play.”  No, indeed.  The play has been thoroughly cinematized.  Indeed, Wyler’s directing is so astute and sensitive we can forgive the film’s irritatingly pat conclusion.

From FX To DVD: “The Americans” Last Year