Woody Allen’s “Love and Death” Can Be Painful 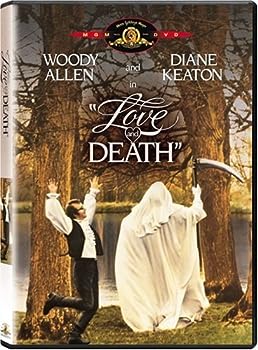 Cover of Love and Death

In Love and Death (1974), an early zany Woody Allen comedy set in 19th century Russia, the wit and humor are cold.  Allen, through his character Boris, cares about no one but himself and, I suppose, the Diane Keaton character he claims to love.  Everyone else is objectified:  it’s in keeping with this kind of megalomaniacal slapstick.  (Er, when you come down to it, Keaton’s Sonja is pretty much objectified too.  Unlikely as it is, she becomes outrageously whorish.)  Allen’s later films were actually more respectable, if less funny.

Many of the gags here, even so, are slowly getting dated, not as funny as they once were.  Because of how flat and desperate they are, others weren’t funny in the first place.  What makes it worse is all those ugly and ludicrous facial expressions Allen puts on, meant to produce a laugh but . . .  Me, they only make glum.