Then I Read Her Book, Now I’m A Believer — A Book Review

Apropos of the 2008 book, The Believers, by Zoe Heller, who are the “believers” in this novel?

Well, Joel and Audrey Litvinoff are fervent believers in left-wing politics, as well as staunch atheists.  Their daughter Rosa, like her parents an ethnic Jew, is very slowly embracing orthodox Judaism, while the couple’s other daughter, Karla, is different.  She too is a left-wing believer but only because mom and dad are, and at bottom Karla believes in nothing but her own happiness.  Like her father Joel before a stroke leaves him comatose, she becomes an (unlikely) adulterer.

Heller does not question the Litvinoff’s politics, although she does make the progressive Audrey an extraordinarily nasty person—and one who smokes weed.  Joel, as I said, philanders.  The couple’s adopted son Lenny has been a drug addict.

As surely as Karla questions her marriage, however, Heller does thoughtfully question Judaism, and yet this is a religion Rosa ultimately wants.  Politics itself, the novel tells us, cannot be a religion, unable as it is to provide a sense of cosmic meaning.  Cosmic belief is in our midst, and the liberal and the illiberal alike—Audrey is quite illiberal in her conduct—don’t understand it and see it as a threat.  Even so, usually it is that which threatens our relationships with other people that hurts and worries us the most.  The characters believe in their own happiness, but without being as limited in their vision as Karla.

If The Believers is not quite faultless, it is, I think, close to it.  It is a fluidly written good read. 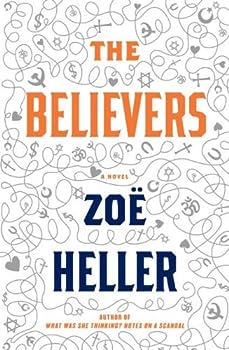 Cover of The Believers: A Novel