The Beauty of the 1955 Christian Film, “Marcelino Pan y Vino”

A group of monks, living long ago in Spain, adopt an orphan child left at the monastery door.  Given the name of Marcelino, the boy (Pablito Calvo) grows to be both a delightful and a mischievous 5-year-old, though also one who is lonely.  He invents an invisible friend, who is gradually replaced by a visible one:  a statue of Jesus Christ, crucified, come to life!

Because the God-man is hungry, the boy brings him bread and wine from the monks’ kitchen, thus inspiring Jesus to rename the child Marcelino Pan y Vino (Marcelino Bread and Wine).  Problems the monks have with a hostile town mayor and probable freethinker are solved through a final stunning miracle Jesus performs and which the monks ecstatically witness.  Once again it’s a miracle involving Marcelino.

This is an imaginatively made, deeply religious Spanish film directed by Ladislao Vajda (a Hungarian!)  In a way it confirms the words of Solomon in Ecclesiastes:  “the day of death [is better] than the day of one’s birth” (7:1).  Marcelino misses having a mother, and for him, not having a mother on earth means having one in Heaven.  The boy asks Jesus, “Where is your mother?”  “She is with yours,” Jesus replies.  Several low-angle shots of the landscape under a spacious sky are meant to emphasize the existence not only of God but also of Heaven.

For God, to be sure, is not simply up above.  “Do you know who I am?” Jesus asks Marcelino.  ‘Yes,” says the boy.  “God.”  This after a crucified man appears in a monastery’s attic.  Marcelino Pan y Vino is a gentle picture truly accepting of the supernatural and the miraculous. 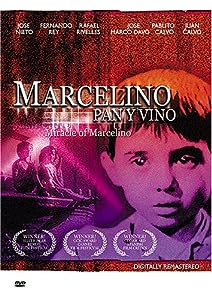 (In Spanish with English subtitles.)

Going Way Back: “The Garden of Eden”