Michel Garfinkiel used the phrase “classic French society” in the May 2007 issue of Commentary magazine.  The sentence he wrote was:  “Classic French society—the one that lasted from the revolution to the end of the 20th century, that is on display in the pages of the great French novelists, and that features in the work of the great film-makers from Renoir to Truffaut, from Chabrol to Sautet—was based first and foremost on strong nuclear families.”

Some years after the 20th century’s end, Avenue Montaigne (2006), by Daniele Thompson, appears and classic French society is all over it.  What we see is as classic as anything in Renoir or Truffaut, and (alas) it’s a society that no longer exists.  I deplore having to add, however, that strong nuclear families are not behind it.  People both married and raising children do not show up in the film.

That isn’t why Montaigne makes me nervous, though.  Its final moments seem to impart that neurosis trumps all, that no matter how neurotic your desire for something is, and no matter how neurotic your behavior, the something you desire can and should be yours.  Thus the silly, fretful concert pianist gets what he wants, and so does the self-absorbed, hysterical actress hankering to play Simone de Beauvoir in a movie.  Is this really the happy denouement Thompson wants?

But don’t get me wrong.  For all this, Montaigne is enjoyable.  It has no plot and yet it’s interesting.  It is airy and sweet and enticingly acted.  It’s arrantly, lovingly Parisian too.  Just don’t expect the great French novelists with their classic French society. 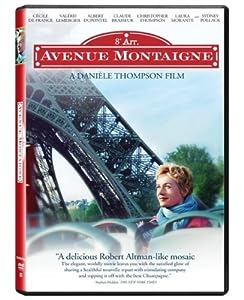 Black And White In Paris: The Movie, “Paris Blues”