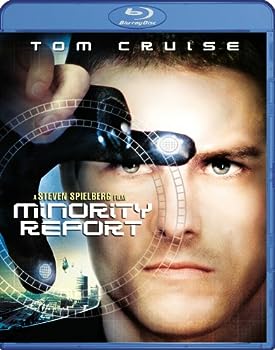 Washington D.C. in 2054 has apparently solved the social problem of murder through the use of a trio of humans known as “Pre-Cogs,” who mystically predict when homicidal deeds will occur.  Tom Cruise‘s John Anderton is at the helm of the Justice Department’s precrime unit which employs the Pre-Cogs.  The plot crisis breaks out when it is predicted that Anderton himself will soon murder a man he does not even know; did the Pre-Cogs make a mistake?    Anderton believes he is being set up, but by whom?  And how?

Anything but dull, this Steven Spielberg science-fiction picture is nevertheless a flop.  Anthony Lane, in The New Yorker, declares that “Spielberg the liberal is asking what the dangers might be when law and order submit to logic and nothing else.”  Okay.  But the liberal Minority Report is not exactly early John Dos Passos.  In reality, law and order are not always submitting to logic in the film:  it is asseverated that the Pre-Cogs occasionally disagree with each other about a future homicide.  Yet an arrest is made anyway.  The film is not so much about dystopia logic as dystopia injustice.  Unfortunately, the Scott Frank-Jon Cohen screenplay (based on a Philip K. Dick story) is maddeningly absurd, especially with all that Pre-Cog fairy-tale stuff.  Things are hardly improved by the aging character enacted by Max von Sydow.  I like von Sydow, but not the part Spielberg gave him to play.

Tom Cruise’s part is fine, vital, but Cruise performs uninterestingly.  Janusz Kaminsky provided Spielberg with the locker-room hazy, supremely dank cinematography the director wanted.  But why did he want it?  Alex McDowell’s futuristic production design is easer to take, for even the cinematography can’t undermine it.

The Hunt And The “Act of Violence”