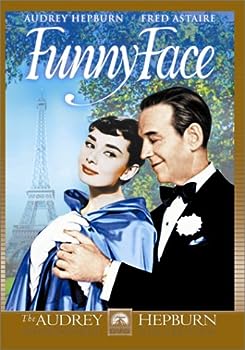 Early on, the movie’s appeal is perfectly evident:  Hepburn passably sings a pop masterpiece, “How Long Has This Been Going On?,” by George and Ira Gershwin.  After that, well, it’s strange to see the young Hepburn fall in love with the middle-aged Fred Astaire, and Hepburn’s dancing is sheerly mechanical in the café scene, but the good stuff keeps rolling nonetheless.  Astaire charms us with another top-notch Gershwin song from the Twenties (terpsichore included)—“Let’s Kiss and Make Up.”  And, yes, even though Hepburn’s singing voice is sometimes less than passable, her acting is gracefully decent, properly amusing.