“Seven Beauties”: Seven More Than I Can Afford

I liked Lina Wertmuller’s Love and Anarchy and Swept Away, two Italian films from the Seventies, but her Seven Beauties (1975) I consider an almost unwatchable dud.  The premise is good: a little Naples coxcomb who is a gangster at heart inadvertently kills a well-to-do pimp.  Later he is forced to join the army (during WWII) and ends up in a German concentration camp where human evil, somewhat like his own, is magnified on a scale he has naturally never seen before; and he will do virtually anything to survive.  The film is a nightmare farce that begins with a voiceover litany about the conduct of mankind, a litany as irreligious as it is cynical and assuredly not as clever as Wertmuller thinks it is.  That which is clever in the movie fails to be rewarding owing to SB‘s frequent clunkiness.  There are too many extreme closeups and too much inadequate pacing.  The film stumbles along with its pretensions.

P.S. I recently re-watched both Love and Anarchy and Swept Away and had to change my opinion of them.  I did not enjoy them. 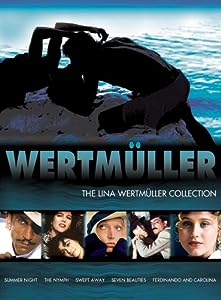 “The Black Book” Of The French Revolution