Scott Vs. The Robbers In The Movie, “Seven Men from Now” 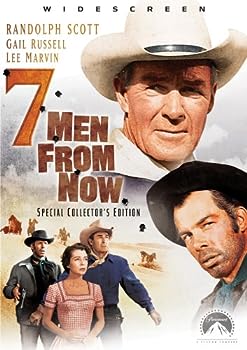 The commercial Western novels from earlier decades usually had their cowboy heroes fall in love with a young woman who had not yet married.  The 1956 Western movie, Seven Men from Now—it too is commercial, of course—offers a hero with a sure liking for a young woman who is married, but he staunchly refuses to start anything.  A man of principle, he is played by Randolph Scott, and the seven men of the title are the gold robbers who murdered Scott’s wife and are now being pursued by him.

‘Tis strange that Ben Stride, Scott’s character, doesn’t appear to be suffering much over his wife’s death, and neither does the aforementioned young woman (Gail Russell) seem devastated by the vile murder of her husband (Walter Reed).  It’s as though the producers opposed any big-deal, negative emotion (and if they hadn’t, could Scott have delivered?).

All the same, this Budd Boetticher Western, written by Burt Kennedy, is dramatically piercing.  A perfect, and not strident, performance comes from Lee Marvin with his big personality.  Russell, Reed and others provide a handful of not-bad performances. . . In more ways than one, Seven Men is colorful, another ’50s picture proving how well literal color works for Westerns.  Above all, it is just as entertaining as those Western novels from earlier decades—those I have read, anyway.

Another Christian-Catholic Novel: “The Dark Angels”

“A Summer with Monika”: A Summer With Sweater Girl