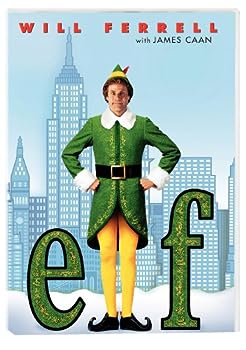 Plenty of belly laughs are to be had from Jon Favreau‘s Elf (2003), but this holiday picture is not very smoothly and sensibly scripted.  Favreau proves he can direct comedy, and Will Ferrell is nothing less than marvelous as an oversized elf . . . er, I mean a human raised by elves and who believes himself to be an elf.  The chap’s unceasing childlikeness, though, began to wear on me, and that’s only the beginning of problems.  Today’s Hollywood is poor at concocting comic stories, not even as adept as the inadequate Neil Simon.  Elf is still worth seeing, but inspires hope no more than it does Christmas cheer.