“Easy Living” Is Another Great Comedy Of The Thirties 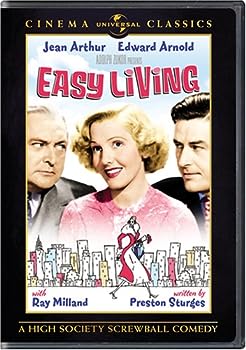 He had a literary source, but Preston Sturges wrote the screenplay for the 1937 film Easy Living (directed by Mitchell Leison), and one is pleased to note that as farce it is pure Sturges.  Sure, it’s devoid of the idiosyncrasy of The Palm Beach Story but is no less winsome than The Lady Eve as it tells of a woman, Mary Smith, mistaken for the mistress of a rich, married financier.  Business operatives are corrupt enough to lavish gifts on Mary in the hope that the financier will show them his good will.  He, however, is faithful to his wife, and in point of fact Mary meets and falls for the rich man’s independent-minded son.

The lines in the film offer no belly laughs but, in my view, the slapstick does.  The American Depression (never mentioned) contrasted with American wealth paves the way for such footage as the chaos-at-the-automat sequence.  With genteel ability, Jean Arthur (as Mary) supplies most of the pic’s charms.  Edward Arnold, I’m afraid, supplies the histrionics.  Leison deserves praise for his directing, but it is Sturges’s film.