Bettie Has Quite A Story: “The Notorious Bettie Page”

For I know your manifold transgressions and your mighty sins (Amos 5:12).  This is in the picture too.  As a child Bettie goes to church; as an adult she accepts the concept of sin and converts to Christianity.  She believes God wants her to stop posing, but does not regard posing as a bad and shameful thing.  Quite naive, this Bettie Page; but she does convert, as did the real Bettie in 1959.

Not a terribly important film, Bettie is nevertheless beautifully made and straightforward.  The time is the Fifties:  at first Harron fashions the nice illusion that the movie itself is a Fifties flick.  Before long, however, the adults-only material intrudes, as does color (though only when appropriate).  Less lovely than the real Bettie, Gretchen Mol is nonetheless positively fine at portraying Page’s simplicity, cheerfulness, vulnerability, sex appeal, and religious awakening. 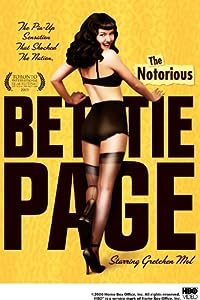 Cover of The Notorious Bettie Page

Heroism And Varmints In “Rawhide”