A Man Gets Very Worldly in “World Traveler” – A Movie Review

World Traveler, from 2002, is about a weak young man (Billy Crudup) who leaves his wife and small son in search of a more fulfilling life.  Traveling the interstate, he tormentedly takes to booze and adultery, besides establishing no important connections with the few persons he meets.  At long last he returns to his family.

For the most part Bart Freundlich, who wrote and directed the film, wins out with this personal concoction.  Why he didn’t create for Crudup’s man any genuine mea culpa I don’t know; Crudup’s having sex with other women condemns him more than anything else.  He is truly deplorable.  Over and above, the story is sometimes hard to swallow and Clint Mansell’s music is occasionally overripe.

But the good news is that WT is serious and Freundlich directed it with imagination.  He keeps it tightly but not too tightly controlled (his fine editor is Kate Sanford), allowing his actors ample time to flesh out a part.  Crudup is absorbing. 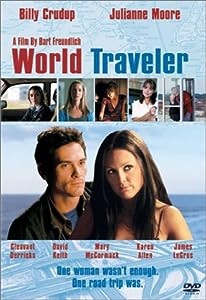 Payne’s “Election” Doesn’t Have My Vote