“The Onion Field”: A Killing Field 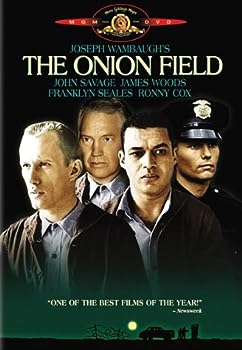 Cover of The Onion Field

Based on a true story chronicled by Joseph Wambaugh in a book, The Onion Field (1979) is a very good Law and Order episode.

Sensibly directed by Harold Becker, it concerns two thieving criminals, Greg Powell and Jimmy Smith, who unintentionally encounter two plainclothes policemen who are suspicious of them.  To get them out of the way, the crooks kidnap the officers—Hettinger (John Savage) and Campbell (Ted Danson)—with Powell soon thinking they will have to be killed because, mistakenly, he deems the kidnapping of cops a death-penalty offense.  Consequently, out in an onion field, Powell shoots Campbell (does Smith do so?), but Hettinger frantically escapes.

By and by the criminals are caught, and exhausting trials get underway.  Officer Campbell is dead, and Hettinger eventually starts wishing he was too:  The precinct holds that he was wrong to surrender his gun to the culprits, and tormenting memories of the homicide keep afflicting him.  Finally he resigns from the force.

A fascinating narrative is served up here (script by Wambaugh), and it effectively makes a sensitive person think.  Protesting that he has never killed anyone, Smith claims he is only a thief.  To my mind, here the film imparts that a man is a fool to commit a felonious crime because it is too highly possible he will sooner or later commit an even worse one.  Franklyn Seales plays Smith with tautness, with sympathy-inducing verity.  James Woods is an evil but human Powell, a man of evident wits and dementedness.  These men and honor among thieves are not exactly simpatico.  Although the film has its defects, I myself am pretty simpatico with The Onion Field.

The Loner Schemes: The Novel, “Loner”