The Langella Vehicle, “Starting Out in the Evening” 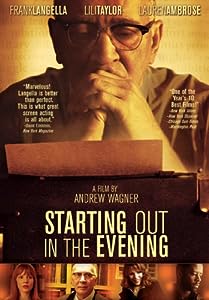 Cover of Starting Out in the Evening

Starting Out in the Evening (2007) is almost mediocre but still worth seeing.

Director Andrew Wagner’s adaptation of a novel by Brian Morton, it tells the story of elderly novelist Leonard Schiller, a fictitious New York intellectual, and a female grad student, Heather, who gives the gent an emotional and sexual attention she has no business giving him.  She does so, while making Schiller the reluctant subject of her master’s thesis, because she fell in love with the man whose first two novels meant so much to her.  But Heather plays with Schiller’s feelings.  There is naught but an ugly mismatch here.  Similarly, Schiller’s daughter, yearning for a baby, finds a mismatch in her relationship with the willful boyfriend who desires no children.  The film has to do with hopes stranded and appetites ungratified.  And it has to do with Heather’s uncondonable behavior.

Starting Out is dramatically thin and provides a little unconvincing uplift.  Some of the talk about literature is claptrap.  Never mind what Heather says; does Schiller really have to call one of his novels passionate?  None of which means the movie lacks verity.  Or gravity.  Also true, though, is that the subject matter is sadder than Wagner seems to realize.

Frank Langella IS Schiller the novelist, giving a splendidly truthful performance.  Nearly as strong is Lauren Ambrose, whose Heather is an intelligent extrovert unconscientious in her vulnerability.  And Lili Taylor does a typically nice job as the writer’s middlebrow daughter.

Plague In TV’s “The Tudors”