“Sullivan’s Travels” By Preston The Cool

Sullivan’s Travels (1941) produces an appreciable number of laughs, especially in its big slapstick sequence, before being deprived of its comedic tone.  It’s a Preston Sturges picture, less successful than The Palm Beach Story and The Great McGinty but still engaging and unique, still the opus of a recherche artist.

Joel McCrea is not bad as a Hollywood director, but Veronica Lake, without nuance or charm, is not good as an aspiring actress.  A shame.

Sturges’s film is a comedy (for the most part) that tells us there is something to be said for comedy.  Also that there is much to be said for wealth, wherever it exists, over against poverty.  Sure ’nuff. 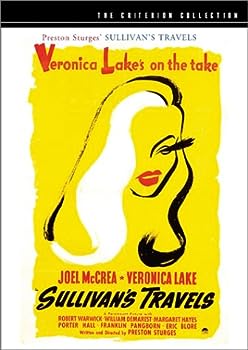