The French director who left me disgusted with Murmur of the Heart left me satisfied with The Fire Within (the French title is Le Feu follet—“Will-o’-the-wisp”), a 1963 gem.  Louis Malle, the director, outdid himself with what is an adaptation of a novel I haven’t read about a man’s unstoppable suicide.

Life seems mainly worth living in the film, but perhaps not for Alain (Maurice Ronet), a former (?) alcoholic with no money of his own and a dissatisfying marriage to an American wife living in New York.  Confidently Malle delivers a world—in 1960s Versailles and Paris—of socially undamaging psychological pathology.  Quiet neurosis is almost everywhere, but Alain is the only suicidal character.  Yet the film induces us to ask questions.  Is Alain’s situation actually hopeless?  At the beginning of the movie we see him with a mistress.  Maybe for a damaged man who cheats on his wife it is hopeless.  Then again, does Alain’s suicide merely emanate from what seems to be an unyielding self-absorption?

The Fire Within is challenging.  For me it is a trifle hard to get through since incidents in the film are scarce, but it’s an utterly mature, smartly made artwork with enjoyable Satie music on the soundtrack. 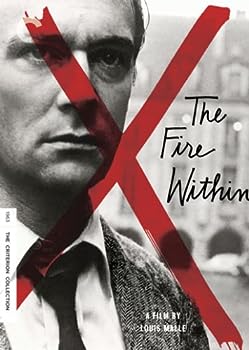 Cover of The Fire Within – Criterion Collection

The Siren Is Blasting: “Emergency”