Sharp Enough: “Knife in the Water”

In Roman Polanski‘s 1962 Polish feature, Knife in the Water, a painful tension exists between a vain sportswriter (Leon Niemczyk) and his wife (Jolante Umecka), who nevertheless wish to entertain themselves on a sailboat outing.  To be sure, theirs can often be called an adult marriage, for they can be good to each other, whereas the unexpected game the sportswriter plays with a young hitchhiker (Zygmunt Malanowicz) he invites to the outing is merely childish.  The sportswriter sees the chap as a challenge to his manhood.  Out of envy, they try to outdo each other in manliness, and a secret understanding exists that if the hitchhiker ever gets the chance to make love to the sportswriter’s wife, the sportswriter will be instantly UNmanned.  The Niemczyk character has no reason to suspect the youth of wanting to do this, and yet . . . suppose it’s true.

Despite some filler, Knife in the Water is artistically solid.  Its script was written originally for the screen and its cast is soundly fine.  Both shots and editing look great in a sequence such as that in which the sportswriter punches the hitchhiker and he stumbles back onto the boat’s sail.  The Jolante Umecka character anxiously but futilely tries the save the youth from the water, for he has falsely told the married couple he cannot swim.  Into the lake he goes, with Umecka crying out to her husband and Krzysztof Komeda‘s insinuating music arising.  Here we have an example of written and directorial splendor.

(In Polish with English subtitles) 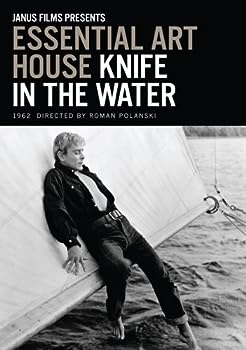 Cover of Knife in the Water: Essential Art House

I Saw “The Woman in the Window”

I Say The Hitman, You Say “The Mechanic”