“Pauline at the Beach” with Her Frolicking Friends

As France’s Eric Rohmer got older, his films got better.  Pauline at the Beach (1982) is a minor case in point.  Herein, a 40ish Lothario and an obtuse young man unable to win back an ex-girlfriend make a mess of things in their small-scale world.  In her own way, so does lovely Marion (Arielle Dombasle), the cousin of 15-year-old Pauline (Amanda Langlet), who receives the brunt of it all.  The attitudes of the adult characters dismay, although I’m afraid Pauline Kael was right that Rohmer “can’t resist setting up the little girl [i.e. Pauline] as our moral instructor.”

All the same, the film is likable and crisp and less boring than such Rohmer pictures as My Night at Maud’s.  As always with Rohmer, there is much conversation, but an advantage exists in revealing things through conversation rather than sound bites.  And even on DVD Nestor Almendros’s summer-season cinematography looks great. 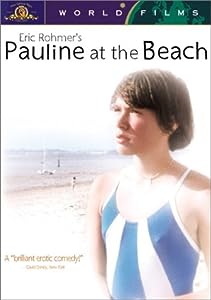 Cover of Pauline at the Beach

Cold Reality in McEwan’s Novel, “The Innocent” – A Book Review