“L’Avventura” and Its Missing Ones

In the landmark Michelangelo Antonioni film L’Avventura (1960), from Italy, the troubled young woman Anna (Lea Massari) disappears during a yachting party, never to be found.  While searching for her, Anna’s best friend Claudia (Monica Vitti) and her boyfriend Sandro (Gabriele Ferzetti) begin a shaky romantic liaison.

A striking secularism, with mere touches of Catholicism, exists in L’Avventura‘s vast world.  But man without religion, without belief, turns into a missing person of sorts (as Anna is literally missing), with only eroticism employed as a tool for consolation.

Never again would Antonioni show as much ingenuity as he did in this picture.  Consider the eerie footage of the empty town called Noto.  And the filmic suggestion of human vulnerability in the spaciousness of the ocean.  Consider the small-town men eyeing and beginning to surround an uneasy Claudia.  And the sad, riveting mise en scene in the film’s final minutes.  On top of it all, the scenario glitters with merit.

(In Italian with English subtitles) 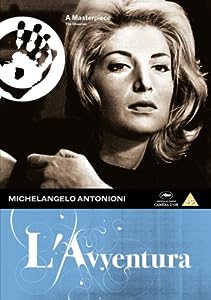