John Wayne At 55 Minutes: “The Trail Beyond”

In the late Thirties, John Wayne starred in a number of so-called B Westerns, none of them long and some of them far better than the episodes of old TV Westerns (ugh!).  1934’s The Trail Beyond clocks in at 55 minutes and, based on a written story, delivers a fairly complex and beguiling plot.  Wayne enacts a man looking for a missing girl and, before finding her, coming upon her dead father’s map to a gold mine, soon to be coveted by reprobates.

The movie is sophisticated enough to feature two cowboys dressed in suits and ties, leaving chaps and ten gallon hats behind, while traveling on a train; and the action scenes are first-rate for a Thirties pic.  Never were the great outdoors so extensively used for zippy Western adventure—er, in my experience, anyway.  It is a dandy spectacle when an overhead shot reveals a man necessarily driving both himself and his horse off a cliff to the river below.

The best thing about the B Westerns is that they were short.  But that doesn’t mean they weren’t enjoyable. 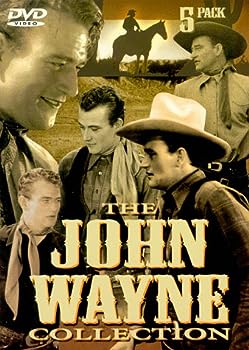