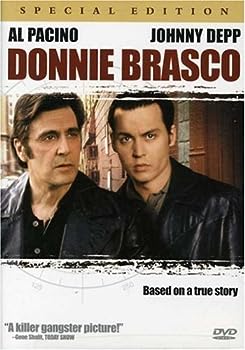 For an American movie, Donnie Brasco (1997) is near-great.  For a movie period, it is simply good, but of course that’s saying a lot.

Notwithstanding he made the repelling Four Weddings and a Funeral, it helps that DB was directed by the talented Mike Newell, who, together with scenarist Paul Attanasio, has borrowed for their enterprise the true story of Joseph Pistone, an undercover FBI agent who fooled and eventually ruined a formidable crime family.  A regrettable fact here is that Pistone, known by the fake name Donnie Brasco while undercover, is an almost completely unsympathetic figure, and Newell and Attanasio never quite catch on to this.  True, they wish to convince us of Donnie-Joseph’s potential for meanness and violence—the traits we see time and again in the mobsters he is working against—but they push it too far.  Happily they know what they’re doing, though, when they show Pistone at home, or at the marriage counselor’s, with his wife Maggie, and we see the ugly strain the undercover work is having on their marriage.  Everything about this is on the mark.

They know what they’re doing in other areas as well.  After quarreling with and being slapped by Pistone, Maggie (Anne Heche) is shot by Newell in closeup before a slow dissolve removes her from the screen and replaces her image with that of the streets where Pistone does his job; there is a certain poignancy to it.  The contrast between the gangsters’ nasty doings in New York City and their amusements on the beach and at a motel swimming pool in Miami leaves its mark on the mind, as does the excellent sequence in which Al Pacino, Michael Madsen, and another fellow, all gangsters, have just been told by the FBI of Donnie’s being an undercover agent and they are uncertain and bewildered as they stand outside a pool hall.

The acting is thrillingly effective—that of Johnny Depp (Pistone) less so, however, than that of Pacino, Heche, and others.