Giving Consent To “Advise and Consent,” The 1962 Movie

I’ve always backed away from reading Allen Drury’s novel Advise and Consent because of its length, but I have now seen the Otto Preminger film adaptation and was glad I did.  It revolves around a President’s nomination of a highly controversial man as Secretary of State, and the tension between pronounced anti-Communism (of the early 60s) and the fervent desire for peace comes to the fore.  This is the fulcrum for skullduggery, including that of a felonious leftist.

Probably the film is faithful to the novel—others could tell me—since author Drury was decidedly against Communism and, here, the anti-anti-Communism which arose during the 1960s has no room to breathe.  The work is at fault for not displaying sufficient sympathy for a man who commits suicide, but at least one appreciates the gravity and evenhandedness of Wendell Mayes’s script.  Although there is too much starchiness in the acting, virtue arises as well.  Charles Laughton proves adept at playing a Southern conservative Congressman, and as politicians, Walter Pidgeon and Don Murray are no slouches either.

Advise and Consent isn’t art, but it has the advantage of being drama that makes sense. 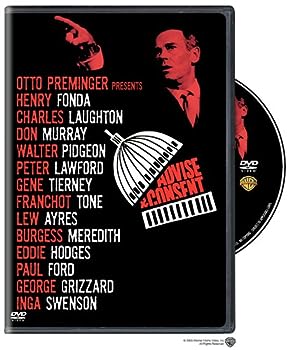 Cover of Advise and Consent

Not Unbearable, But . . .: The Film, “The Unbearable Lightness of Being”

“An American Carol” With Its Fast Jabs