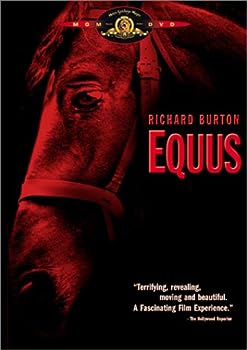 1977 was a bad year for cinema.  Sidney Lumet‘s film version of the Peter Shaffer play, Equus, didn’t make it any better.

In Equus, we witness what amounts to a religious passion, for a nonexistent horse-god, and the morose psychiatrist (in the film, Richard Burton) who cures this passion.  But John Simon was right when he complained that the work “falls into that category of worn-out whimsy wherein we are told that insanity is more desirable, admirable, or just saner than sanity.”

The movie is dramatically underwhelming in a way the play, bad as it is, is not.  This fits in with how dismal it all is:  a nudity-filled, finally bloody piece of balderdash, this.  And if Simon was correct that it’s possible to read Equus as “a thinly veiled paean to pederasty,” it does not surprise me.  The most important character is a boy, and heterosexuality is not the most fulfilling thing in the world here.

Tom And Gerry In A Palm Beach Story

SS Thugs At Gleiwitz: The Film, “The Gleiwitz Case”