For the Love of Knowledge: 1971’s “Carnal Knowledge”

Jonathan and Sandy, the two most significant figures in Carnal Knowledge (1971), enter some decidedly sexual but, by and by, dismaying and all too pedestrian relationships with women, primarily Susan and Bobbie, the account of which begins with their college days and ends in the 1970s when both men are in their forties.  Susan, acted by Candice Bergen, hooks up with Sandy (Art Garfunkel) but cannot or does not resist the temptation of sleeping with Jack Nicholson’s Jonathan (Sandy’s best friend).  A later marriage between Susan and Sandy turns unhappy, and Sandy starts cheating on Susan with another woman.  For his part, Jonathan meets the toothsome, buxom, fun-loving but neither stupid nor unkind Bobbie (Ann-Margret), she who can call Jonathan an obscene name for his reluctance to shack up with her—he’d rather just visit and copulate, thank you—but who also, finally, abjectly pleads with him to make her his wife.  Jonathan will have none of it until Bobbie tries to pack it in; then, ashamed, he marries her.  Later there is a divorce.

At forty, Jonathan has become a prosperous but misogynistic boor who regularly meets with a literate, well-to-do prostitute from whom he hears prepared, ego-stroking words about his being a “real man.”  Such words are required for producing for the fellow an erection.  Sandy, forever sans Susan, is not much better off:  He now loveth the counterculture, talking of “vibes” with his hippie girlfriend.  “Both men are losers, pitiful or laughable” (John Simon) in this a director Mike Nichols-writer Jules Feiffer production which acridly bashes away at the sexual revolution.

Feiffer’s dialogue is a grabber:  smart, mocking, and what today would be considered politically incorrect:  “I don’t want a job, I want you!” exclaims Bobbie to the man who won’t marry her—hardly a line a feminist would prize.  She might approve of this one, though:  Jonathan thinks he knows how to be tender to a woman, which prompts Bobbie to yell, “Feeling me up in public is not affection!” . . . 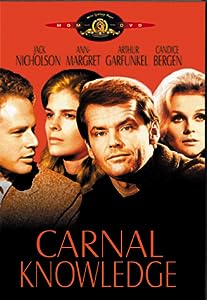 Listen To The Band: “Citizens Band”

Steely And Seely: On Two By Buster Keaton