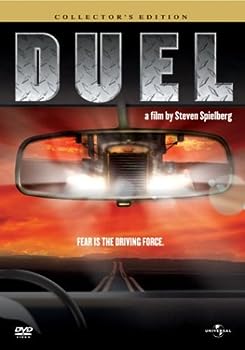 Man-made cars and the interstate highway system are not the modern wonders to make us forget, and not be shocked by, the strange brutality in human behavior.  Indeed, it is on the interstate that businessman David Mann (Dennis Weaver)—in Steven Spielberg‘s Duel (1971)—encounters a stranger who tries to off him with a tanker truck, the reason for which is never revealed.  It is activity as absurd as it is horrible.

Spielberg’s first notable success, Duel is a made-for-TV action thriller which has been called “Jaws on wheels” except that it’s a better flick than Master Steven’s Jaws.  It has a shaky climax, but is consistently fun and nicely economical.  The smart script is by Richard Matheson, and Weaver is constantly on screen but never abandoned by skill.  As well, Duel is one of those many 1970s films enamored of rural American settings, as though it is only in these pristine outdoor places that insights about life may be had.