An Outsider’s Look At “The Insider”

First, it is too long.  Second, a large number of closeups in a movie lasting 158 minutes gets enervating.  Third, it is somewhat pretentious.  Fourth, Lowell Bergman, the Al Pacino character, is two-dimensional.  Fifth . . . oh, never mind.  Despite all its problems I’m glad this turkey was made owing to a few choice items, such as the acting of Russell Crowe, Pacino, Diane Venora, et al.

Michael Mann‘s film is a ho-hum journalistic chronicle regarding the 60 Minutes TV series and the cigarette industry.  What satisfies is the way it exposes the ability of a powerful business to devastate an individual, and although here the business is Big Tobacco, Big Media can be just as culpable for such a thing.  Add to this some of Mann’s directorial choices and the sublime cinematography of Dante Spinotti, “one of those rare cinematographers who know how to highlight with shadows” (Stanley Kauffmann), and you have a couple of other Insider assets.  You have a movie which is artistically inviting in spite of itself. 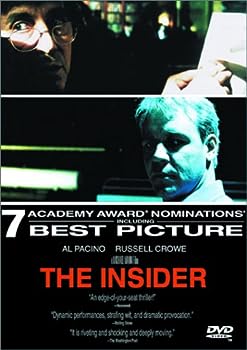 Cover of The Insider

A Boy And His Balon Rouge: “The Red Balloon”