The American version of Gabriele Muccino’s Italian film, The Last Kiss, directed by Tony Goldwyn, is as dandy as the original.  Neither flick is great, but both are vivacious dramatic grabbers.

Goldwyn’s film (2006) is, as critic Ella Taylor opined, an “admirably understated handling,” albeit she adds that it’s a handling of “dispiritingly slender material.”  Not to me.  Slender material, yes, but not dispiritingly slender.  The movie is a partly comic roundelay of absolute chemistry between guys and gals and of turmoil and bitterness.  It’s simple but electric.

More, it’s an actor’s triumph.  Well, not for Casey Affleck, neither interesting nor deep enough, but Jacinda Barrett is entirely convincing in sweet calm and in fury.  Zach Braff and Rachel Bilson, though they never surprise us, are never false.  Blythe Danner is commanding in nuance, and Michael Weston is all earthy appeal.  It is, finally, proper that Goldwyn’s Last Kiss is sexier than Muccino’s original—that it is spicy and somewhat candid since the first version has the advantage of being the first version. 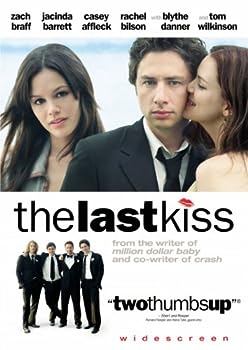 Ready To Cut To Chase