Stanley Tucci and Campbell Scott, both actors, scored a lot of points in directing the 1996 Big Night, for which they chose an easygoing but not too slow pace, dabs of effective slow mo, wise medium shots of people, and Felliniesque dramatics.  They both act in the film too, and Tucci, talented guy, co-wrote the original screenplay, which has to do with the efforts of Italian brothers to keep their traditional Italian restaurant afloat in the big-city America of the 1950s.  Sadly, one of the brothers has given up all integrity.  He is desperate, even betraying his pleasant girlfriend (Minnie Driver).  A novel idea obtains, then: i.e., moral compromise takes place so that compromise with cuisine (traditional Italian) might be eschewed.  Not that the filmmakers condone this compromise, you understand; they don’t.  But it does go on.

Honest and endearing, Big Night is one of the cinematic big deals of ’96. 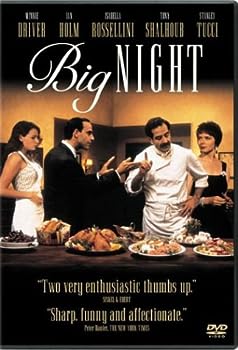 C. Colbert Does Well In The Early Talkie About Cleopatra