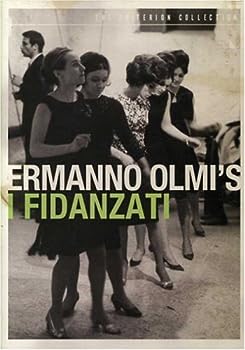 Cover of I Fidanzati – Criterion Collection

Giovanni and Liliana, engaged to be married, are capable of bringing joy to each other, but . . . it might not happen for a long while.  Or it will happen only periodically.  The couple must be temporarily separated from each other because they cannot afford to marry and Giovanni, much to Liliana’s sadness, has agreed to a welding job in Sicily.  The film—Italy’s The Fiances (I Fidanzati, 1963)—then zeroes in on Giovanni’s solitary life in a mundane Sicilian town.  I mentioned joy—but the town offers little of it.  It can be quite dreary.

The Fiances was scripted and directed by Ermanno Olmi, and it is tempting to think that while making it he was in love with Loredana Detto, the actress in Olmi’s Il Posto, whom he later married, and that this accounts for the film’s eventual romantic feeling.  Expressed here, in fact, is the need for the certainty of love (romantic feeling or no).  Giovanni and Liliana, we see, are more than the weak and financially poor persons they necessarily know themselves to be.  They are fiancés, and to Olmi—a devout Catholic, in fact—this makes all the difference in the world.

Starring Carlo Cabrini and Anna Canzi, the picture is short and artistic, gentle and tasteful.  It has more vigor than an early ’60s Antonioni film, but is more restrained and indeed smarter than a Fellini film.  Few Italian products nowadays surpass it.

(In Italian with English subtitles)

Miss Pris And The Rest In “Blade Runner”